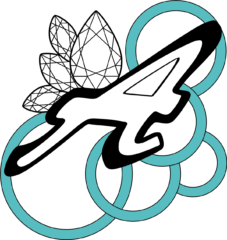 “Spurred to shift from the usual wire technique to the plate technique, the Annaratone craftsmen and women created a “jewellery stage set” with Carlo Massoud. This simple model of three buildings is fun and irreverent, concealing within it over twenty jewels and four unexpected figures which it is left to the users to play with in the most inventive way.”

A different technique was used for

each of the 34 pieces that make up the work

Pure silver was used to make the work, subsequently alloyed with sterling silver to make it malleable.

It took 250 hours to complete the work and 94 hours for the 3D printing.

Each individual piece requires specific skills and it was all designed and obtained using the lost wax technique; many of the objects were made in micro meltable wax with a 3D printer; after casting they were then burnished, finished and polished by hand.

Process of making the Operæ

Having seen and examined the highly complex and richly detailed sketch,

we decided to create the entire structure by bending sheets of sterling silver.
Carlo Massoud Designer

The silver sheets were made using the technique of casting into bars and subsequently sheets using a plate rolling mill until a thickness of about 0.40 mm was achieved, which makes it possible to create very difficult folds.
The base on which the buildings stand was made starting from a base of Acetylic, a very strong industrial mechanics material; the silver plate was bent and fastened onto this base which was then perforated to anchor all the structures of the design together.
The same technique was used to create the Church and the “Palazzo Moderno” (modern building): a wooden core was used to make the structure solid and strong, and it was then covered in silver. 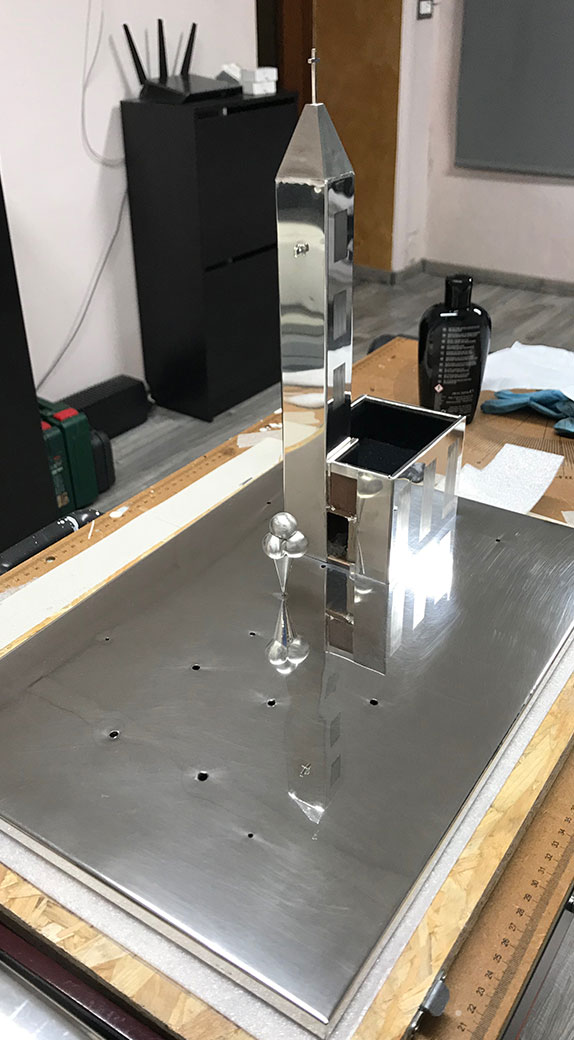 A particularly interesting feature of the external walls of the Church is the satin finishing of the windows and doors, which was obtained by covering all of the structure that was to remain shiny and using the brushing technique on the windows and doors that had been left uncovered.

Once the masking tape was removed, the treated parts emerged, giving a striking appearance to the Church. A genuine jewellery box covered in black velvet is concealed in the area under the roof.

After the Palazzo Moderno was assembled, complete with balcony, it was subdivided and then hand-engraved; 5 rings are carefully hidden on the roof of the palazzo: the staircase, 2 satellite dishes and 2 antennae.
They appear to be an integral part of the structure, but in reality they can be worn and afterwards placed in the palazzo where a cavity has been made especially for them, covered inside with black velvet. They are made from hand-worked silver plate and wire.

Some important pieces deserve a more detailed description.
There are two “Tree brooches” that look like olive trees, created in soft wax without using 3D printers. The trunk and branches were made by twisting several square and rectangular wires and then fusing them. Having decided on the type of tree, we went on to solder the drop-shaped settings which house the synthetic emeralds, cut into drops and embedded in a claw. An old-style pin was soldered onto the back, to make the piece possible to wear.
3D was used to create the palms, however, to emphasize the veining of the leaves, these were then soldered to a structure in the shape of the tree, again with an old-style pin to fix the brooch. Each palm tree has been burnished to highlight the chiaroscuro effects. 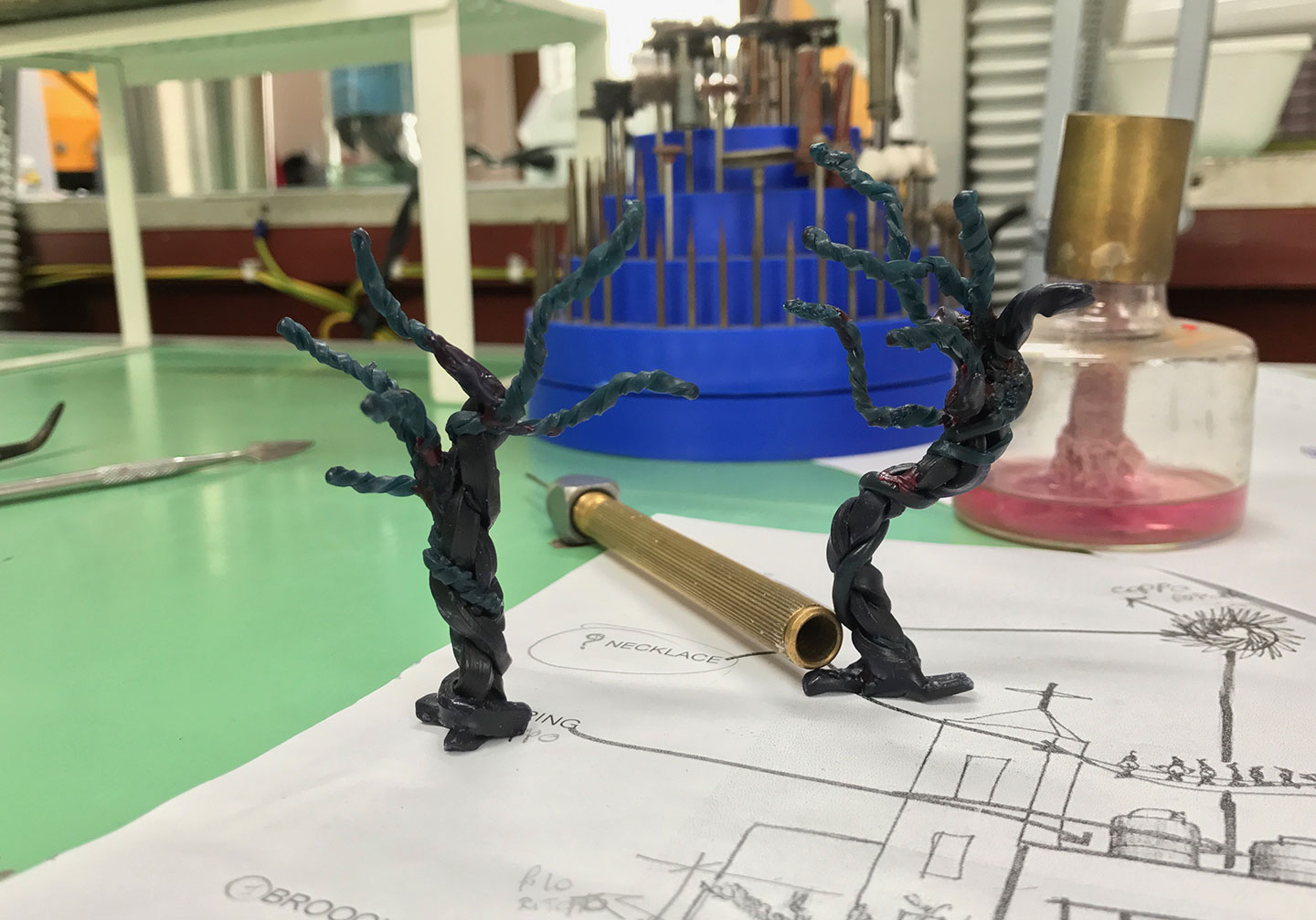 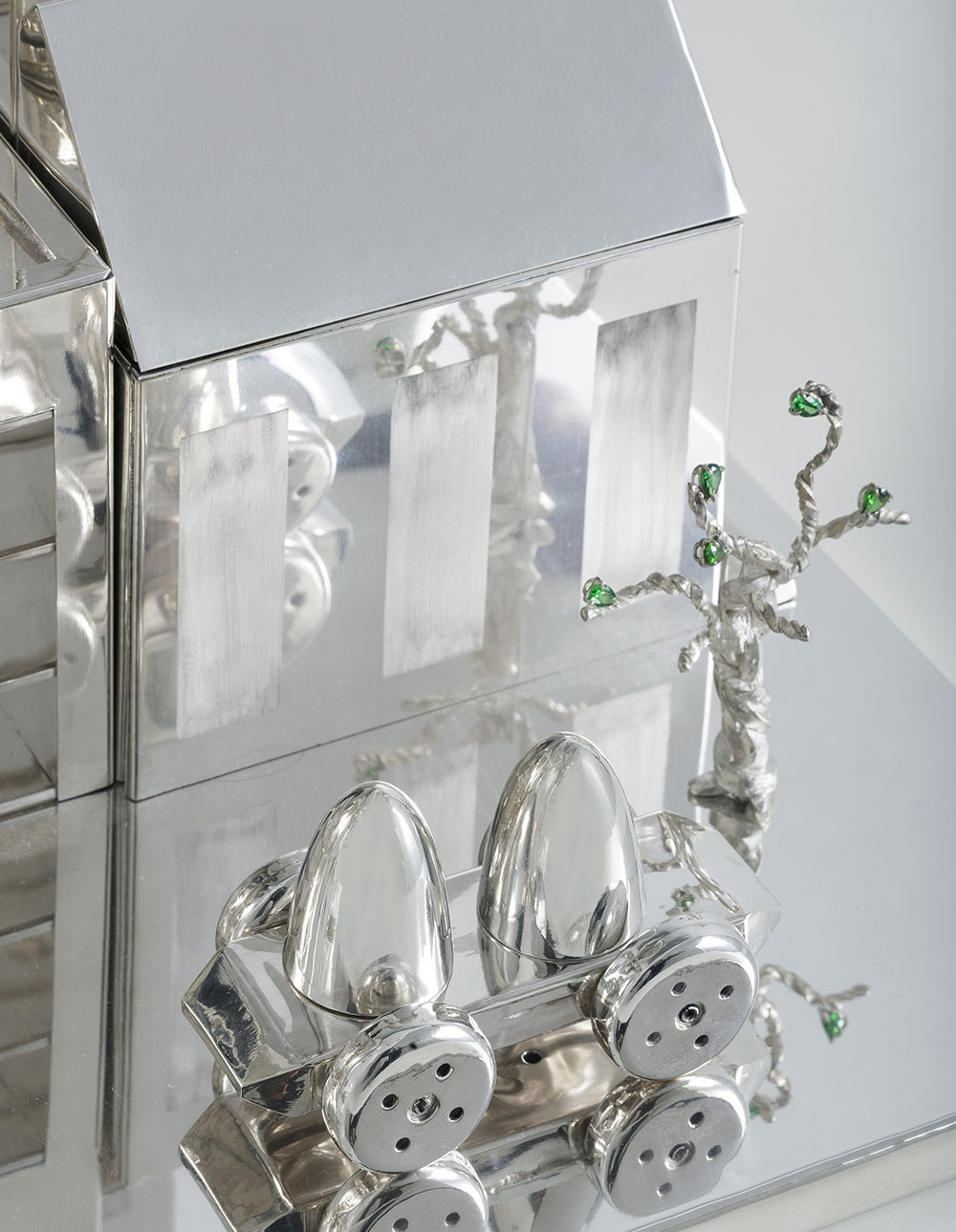 The Gorilla swinging from the palazzo by its hand was made by micro fusion and hollowed out inside so that it could then be diamond-tooled with special cutters; two 3mm diameter rubies were then set into the gorilla’s eyes.

To make the pendant sun we made two half spheres in order to make the pendant light and so as to facilitate the arrangement of the rays and the loop of the chain.
Once the rays were arranged and marked, we pierced and soldered each individual ray and created a ball on the tip of each point so that the object can be worn.
The entire pendant and the support that keeps it inside the work are made from shiny silver.

Inside the “Ice Cream Shop” structure there is an ice cream cone made of 5 pieces without any soldering.
To add decoration and represent the different ice cream flavours we decided to use 4 different types of finish: Satin, Brushed, Shot-peened and Diamond-tooled; a glossy finish was used for the cone.
4 water tanks were placed on the roof of this shop, two of which can be opened while the other two can be worn as real rings. 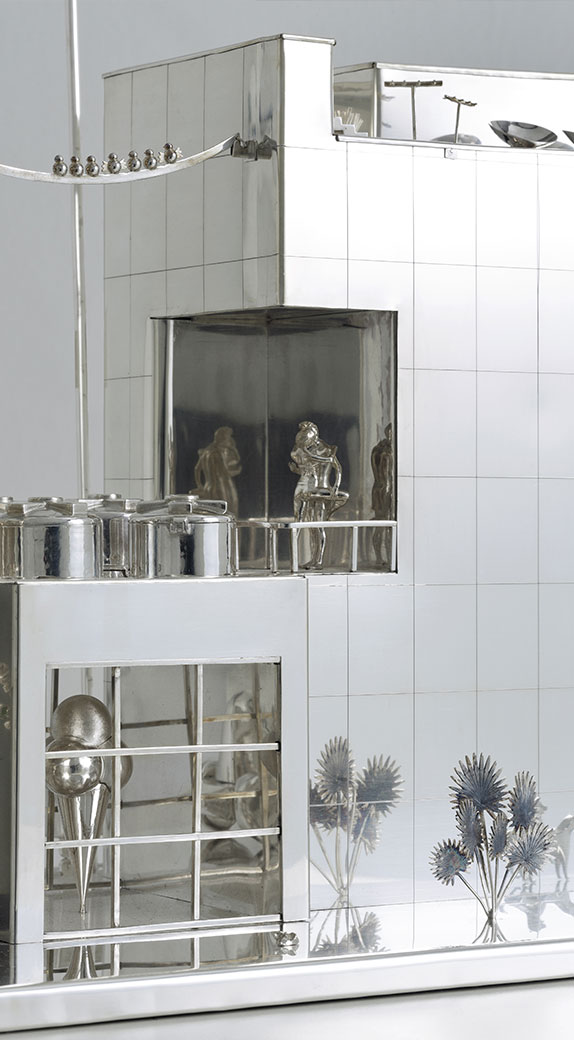